This summary, about the first distance estimation of a star, was originally prepared  as a complimentary for a paper about 61 Cygni, published in the Icelandic Scientific Journal ‘Náttúrufræðingurinn’, in 2016 but the limited space did not allow it to be published. To prevent it from being forgotten it is presented here. It only summarize what can be read in detail by several authors (see references). More information about 61 Cygni on this website is provided here.

The identity ’61 Cygni’ appeared first in the star catalogue compiled by the English astronomer John Flamsteed (1646-1719), Historia Coelestis Britannica, published in 1725.1 James Bradley (1693-1762) of Greenwhich, a colleague of Flamsteed, was first to register it a binary star, in September 1753.2 The German-English astronomer F. W. Herschel (1738-1822) included 61 Cygni on his list in the quest of finding the distance to the ‘fixed’ stars, in 1780. Herschel recorded binary stars in believe and hope of discovering stellar annual parallax. At the turn of the 19th century, 61 Cygni got deserved attention due to its unusually fast proper motion, which indicated its proximity to our solar system.3,4 A proper motion is the apparent motion of a star across the celestial sphere, relative to more distant stars. All stars move in space, but those nearby seems to move faster – have greater proper motion. 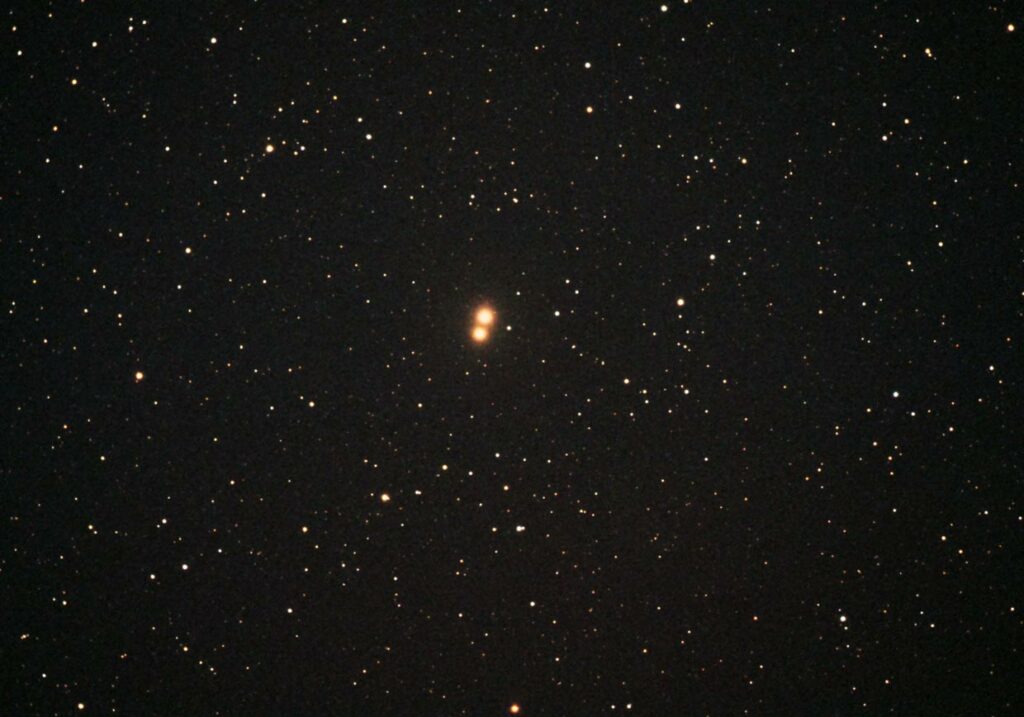 In the 18th century, the distance of the stars was unknown. A method of finding the distance of nearby star, however, had been postulated in the late 16th century, shortly before the invention of the telescope. The German mathematician Johannes Kepler (1571-1630) pointed out that if a nearby star was found and its annual parallax measured, its distance could be calculated. Also known as the stellar parallax, because the Earth’s orbit around the Sun is wide enough for the position of the nearest stars to shift slightly over the year. The shift is measurable with a modern telescope. This remarkable invention became a reality in Kepler’s time and confirmed his clear vision much later. Development in telescope making were slow and the successful confirmation came more than 200 years after his death.4 Stellar parallax is the first step of the cosmological ladder, of measuring distances in the universe.

The search for a nearby star was like finding the needle in the haystack. In the 17th and 18th centuries, astronomers tried without success. Such significant finding would not only solve the question of distances to the stars but confirm fundamental doctrine: that the sun is at the center of the solar system, not Earth. By the first half of the 18th century, Bradley and Molyneux (1689-1728) had discovered that the stellar aberration in the measurements of the star Gamma Draco (γ Draconis) occurred because of Earth’s movement in space. The last straw of opponents of the heliocentric theory was that if the earth orbited the sun, nearby stars would shift back and forth throughout the year. There was a lot at stake, it was possible that they were so far away that the distance was immeasurable.4

At the turn of the 19th century, the Italian G. Piazzi (1746-1826) recorded proper motion stars, and his catalogue was published in 1806. In 1792, he discovered, by comparing his own observations with Bradley’s, that 61 Cygni had moved close to 1/10 of the moon’s diameter. Piazzi repeated the measurements in 1804 and concluded it must be a nearby star since its proper motion was so rapid. He named it the ‘flying star’ and commented that astronomers with powerful measuring instruments should consider this as a promising task for a study of the solar parallax. 61 Cygni is fainter than those stars considered most probable candidates at that time. Bright stars were assumed closer and more likely to shift. His comment however never got attention among astronomers, but six years later Friedrich W. Bessel’s paper (1784-1846) with a corresponding suggestion of the unusually rapid proper motion, attained the attention.5

Mynd/Fig. 2. Sporbrautarganga 61B um samþungamiðju kerfisins en 61A höfð „föst“. Rauðar línur vísa á höfuðáttir, kvarðabilið er 5″. Afstaða stjarnanna á vissum árum miðast við þá  sögu sem rakin er hér. Enski stjörnufræðingurinn Bradley (1693–1762) skráði það fyrstur sem tvístirni, árið 1753. Þá var 61B norðaustan við 61A  og hornbilið 14″. Árið 1792 komst Piazzi að hraðri eiginhreyfingu 61 Cygni, 1816 reyndi Bessel að ákvarða hliðrununa en það tókst fyrst 1837.  Árið 1916 og 1951 voru teknar myndir frá Lowell stjörnustöðinni í Arizona. Höfundur hefur síðan myndað 61 Cygni og bætt inn frá árabilinu 1992 til 2021. Bilið verður víðast í kringum 2090 (~34″) en minnst nálægt 2330, ~8,5″. – The drawing reflects the orbit of 61B around the barycenter with 61A in center. Cardinal directions are denoted and each tick marks a interval of 5 arcseconds. The  position and angular separation is shown for specific years summarized in the text. In 1753 the English astronomer James Bradley (1693–1762) noticed it first as double star, when 61B was northeast of 61A at distance of 14″. 39 years later Piazzi discovered its rapid proper motion. In 1816  Bessel unsuccessfully tried to determine its parallax but managed to do so in 1837. The 1916 and 1951 separation is when photographs of the pair was captured from the Lowell Observatory, Arizona, USA. Author has captured images in the period 1992-2021. Its widest separation of ~34″ is predicted close to 2090 but decreases to ~8.5″ around 2330.

Astronomers who accepted this challenge in the early 19th century, were Arago (1786-1853) and Mathieu (1783-1875), Peters (1813-1890), von Lindenau (1780-1854) and Bessel himself. His measurements in 1815-1816 turned unsuccessful. These were not the first observations Bessel did of 61 Cygni, as three years earlier he had estimated the orbital period of the binary to be 400 years (it is close to 700 years). The results from above attempts indicated proximity but became unsatisfactory after F. W. Struve’s (1793-1864) observations from the Dorpat Observatory in Prussia, 1818-1821, demonstrated that the instruments used did not have the required accuracy. Struve was thus skeptical on that he could ever measure the parallax of a star due to the low quality of the telescopes. He still participated in the race who would confirm the first distances and later managed to measure the parallax of the star Vega, which is much less than 61 Cygni. 3,4

In 1837, Bessel received a very precise heliometer (Königsberg heliometer) built by the German optician Josef Fraunhofer (1787-1826). He decided to repeat the observations on 61 Cygni, because with such quality instrument it was possible to make as accurate measurements as needed. Bessel published the results a year later; the parallax of 61 Cygni was 0.313 “, the star was 10.4 light-years away. He explained why 61 Cygni was chosen. The proper motion had indicated proximity and therefore a possibility to measure a shift. The star was visible for most of the year and many other nearby, available for comparison. It was also appropriate that it was a binary star, because the measurements became more accurate in the heliometer.6

A year later (1839), Struve presented his findings on Vega. Its solar parallax he measured 0.125″, the star was at a distance of ~25 light-years, considerably farther away than 61 Cygni. In the same year T. Henderson (1798-1844) published his results on that Alpha Centauri (α Centauri) was about three light-years away. Recent measurements establish it at 4.36 light-years from the sun. These studies became the first profound indicator of the scale of the universe. 3,4,7 Bessel repeated measurements of 61 Cygni with the Königsberg heliometer later and obtained similar result, thus strengthening the belief of the actual distance 61 Cygni as well as repeated measurements in the 19th and 20th centuries implemented from a number of observatories yielded similar results. 3,4